During the January 8, 2019, Sno- Eagles Board of Directors meeting, President Wolf suggested collecting non-perishable food for the School Backpack Program.  Audrey Stearns initially informed the board of the program in December.  It is a wonderful opportunity for the club to give back to the community.  The School Backpack Program provides kids at the elementary and high school level with non-perishable food to take home over the weekend, as many students lack proper nutrition while at home on weekends. The Club will start collecting food at each membership meeting starting in January.

Miss Sno-Eagle, Cheyanne Warren, has been attending board meetings and membership meetings as well as learning more about the club.

At the January membership meeting, the club presented Jim Ayers with an Honorary Membership and plaque to celebrate all the years Jim has given to the club.  Jim is one of the Founding Members of the club.  Congratulations Jim.

Bylaw changes were read by Fred Rockafellow and adopted by vote of the membership.  The biggest change in the amended bylaws was that a Family Membership has two votes.

Club volunteers picked up trash at the Pond Hockey Tournament on Dollar Lake.  The club received a significant contribution for their work.

President Wolf announced he submitted a nomination packet for the AWSC Snowmobile Friendly Community Award to be awarded in March.

The Weekday Away was scheduled for February 12-14.  The destination was the Dollhouse B&B in Florence, WI.

The Sno-Eagles were contacted by the Derby Track to run the Food Concession Stand for Vintage and Derby Weekends.   The club staffed the concessions and received a nice donation from WCDC.

The Sno-Eagles had the privilege of assisting in the wedding of Joe & Holly Czarnecky on February 1, 2019.  Our groomer and drag brought guests from Bauer’s Dam Resort to the Buckatabon Bridge.  Approximately 12 club volunteers guided the 74 guests on snowmobiles from Eagle Waters Resort to the Buckatabon bridge for the wedding.  It was a great time. 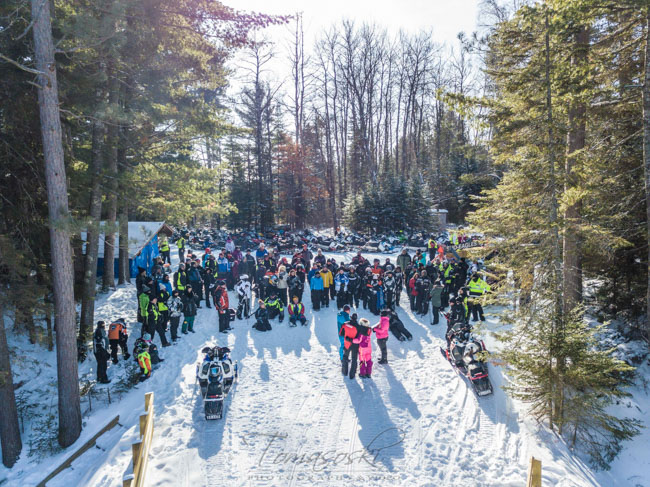 The AWSC presented the Sno-Eagles with the Snowmobile Friendly Community Award at the March AWSC meeting.

There were two new fundraisers this year.  The first being a Pancake Buffet Breakfast at the VFW on July 20, and the second a Fish Fry at the VFW on August 30, 2019.

Past president, Dave Everett, was awarded the Big Dumper Award for his “big dump” in the woods during a Thursday ride.

The big news from AWSC this spring was a change in their bylaws having all AWSC memberships expire on June 30 of each year.  This should make it easier for clubs to manage membership each year.

The Board of Directors authorized the purchase of a $25,000 brush cutter for the Pisten Bully.

In September, Treasurer Fred Rockafellow reported the club raised $1,800 at the Breakfast Buffet and $2,000 at the Fish Fry fundraisers.  The food provided by the VFW was great, and a big thank you to all our volunteers who helped serve and cook.

Audrey Stearns and Linda Brunswick announced they are organizing the Weekend Away to Tomahawk on January 31-February 2, 2020.

The WCDC has asked the club to operate the food concessions for the Vintage and Derby weekends at the track in January of 2020.

Scott Linn and his crew prepared for this year’s Snowmobile Safety Course scheduled for October 19-20, 2019 at Trees for Tomorrow.

On a sad note, Nancy Tahtinen, wife of Jerry, our past president, passed away in late September.

President Wolf announced the club will continue to support the School Backpack Program by collecting non-perishable foods at each membership meeting.

The annual Christmas party was planned by President Wolf and his wife Cheryl.  It was held at Catch 22 on December 13 and had an  Italian theme.