The Sno-Eagles 4-SeasonsTrail Guide continues as our Editor for 1985 is seen working on this year’s edition. 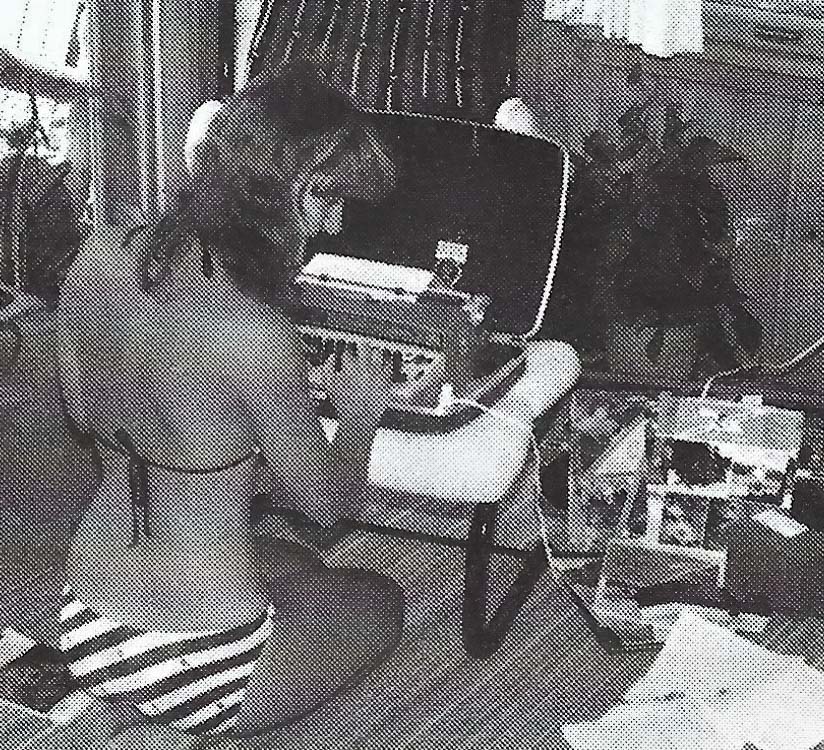 The editor, Karen Walkowski, demonstrating the proper way to write copy during the summer in Eagle River Winning The Miss Sno-Eagle title for 1985 was Catherine Ryzner. Shown is the 1984 queen, Joy Buchholz, relinquishing her crown, while from left, first runner-up Kim Schoessow and second runner-up Cheryl Boettcher look on

On January 15, 1985 the Tri-County Snowmobile Tour was held. The tour took 20 snowmobilers from the club, members of the Ski-Doo factory, and many other groups from the Hiawatha Supper Club to Phelps, then on to Nelma with lunch at the Brule River Tap, after lunch moving on to Three Lakes, and then back to Hiawatha for a bonfire and cookout. All you can eat hamburgers for $3.00.

The club will provide volunteers for the Derby Races and hockey game again this year. Eagle River did not see much snow until February. The “white gold” finally arrived in force in February. New to the trail system for 1985 are the lights marking the trail across Eagle lake from the boat landing to Lake Forest Resort and on Catfish lake, from the Persian Paradise to Braywood Resort and Twelve Pines.

A new section of trail was created from the Frontier Bar to Phelps. The budget for 1985 was approved with an estimated income of $34,000 and an estimated expense of $38,500. Again, the largest fundraiser is the sale of 4-season Trail Book/Guide and largest expenses are $10,000 for printing, $5,000 to Headwaters and $5,000 to Groomer Replacement fund. The club expects again to have an operating loss of $4000 similar to the previous year.

The Sno-Eagles safety class was put on by Dennis Krusick, Ron & Kim Schoessow and Harry Lee to a nice group of kids.

The club is asked to “put on their thinking caps” and contact Jim Ayers or Dan Gaszak to look at more or better fundraising ideas to help the club.

March 20 was an open meeting to discuss the concept of Headwaters Trails doing trail maintenance and signs along with grooming.

The Spring dance scheduled for April 20 at Persian Paradise is being planned. Get out your “glad rags and dancing shoes”. The snowmobile trails officially closed April 14; however many people are still out snowmobiling due to the late snow.

The Sno-Eagles will participate again in the July 4th activities and do the Fair Food Booth.

In August the club officers and the Chamber of Commerce agreed to have the Chamber donate $600 to the club rather than advertising in our 4-season Trail Guide. Jim and Sally Ayers won the mixed doubles canoe race of 5 miles sponsored by Sportsman’s Chalet.

December 29th was the Poker Run fundraiser. Ron Schoessow and Dennis Krusick will again run the Safety Course. Weekend away is planned for February 21-23 at Circle Hills motel in Ironwood, MI. Women on Snow weekend is being planned by the Flying Femmes for January 31, 1986.