The Association of Wisconsin Snowmobile Clubs (AWSC) formally announced nine Wisconsin Communities as a “Snowmobile Friendly Community” during the convention.  Other communities winning the award were Algoma, Hayward, St. Germain, Three Lakes, and Tomahawk, along with the counties of Bayfield, Iron, and Sawyer.

This award celebrates and recognizes the clubs and communities whose safe and responsible snowmobiling practices, policies, facilities, and tourism promotion programs enhance the positive impact snowmobiling has on residents, visitors and businesses.

The Sno-Eagles applied for this recognition in an effort “give back” to the community that supports snowmobiling.  It required completing a detailed, 21-page application describing how the Sno-Eagles advocate for safe and responsible snowmobiling in the Eagle River area.

The City of Eagle River, the Towns of Lincoln, Cloverland and Washington, the Eagle River Chamber of Commerce, and Vilas County Tourism, all provided letters of support for  the Sno-Eagles.

Created by the AWSC, the SFC Program partnered with the Wisconsin Department of Tourism to ensure the statewide SFC Evaluation Panel included a Tourism professional to ensure the Program accurately identified which communities and snowmobile clubs were “best” at welcoming, preserving, and providing snowmobile access, support, and services for snowmobilers.

The SFC Award/Designation lasts for four years and communities may reapply for subsequent awards at the end of their term.

This award celebrates and recognizes the efforts of the Sno-Eagles Snowmobile Club and local communities in support of snowmobiling.  This partnership acknowledges the benefit snowmobiling provides to the local economy of the Eagle River community.

Snowmobile Friendly Community signs will be placed at key locations throughout the Eagle River area. 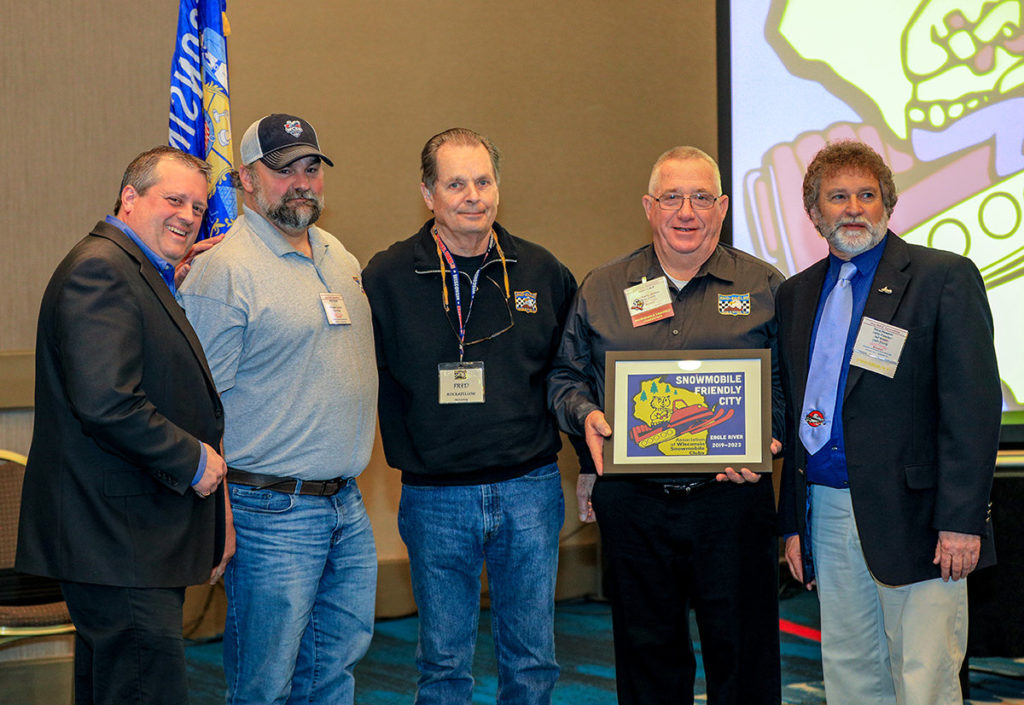