On the cover we see 1977-78 Sno-Eagles Queen, Dianna Rebarchik on a new 1977 Ski-Doo along with Junior Ludwig, the past President from 10 years previously, kneeling on a 1967 Ski-Doo 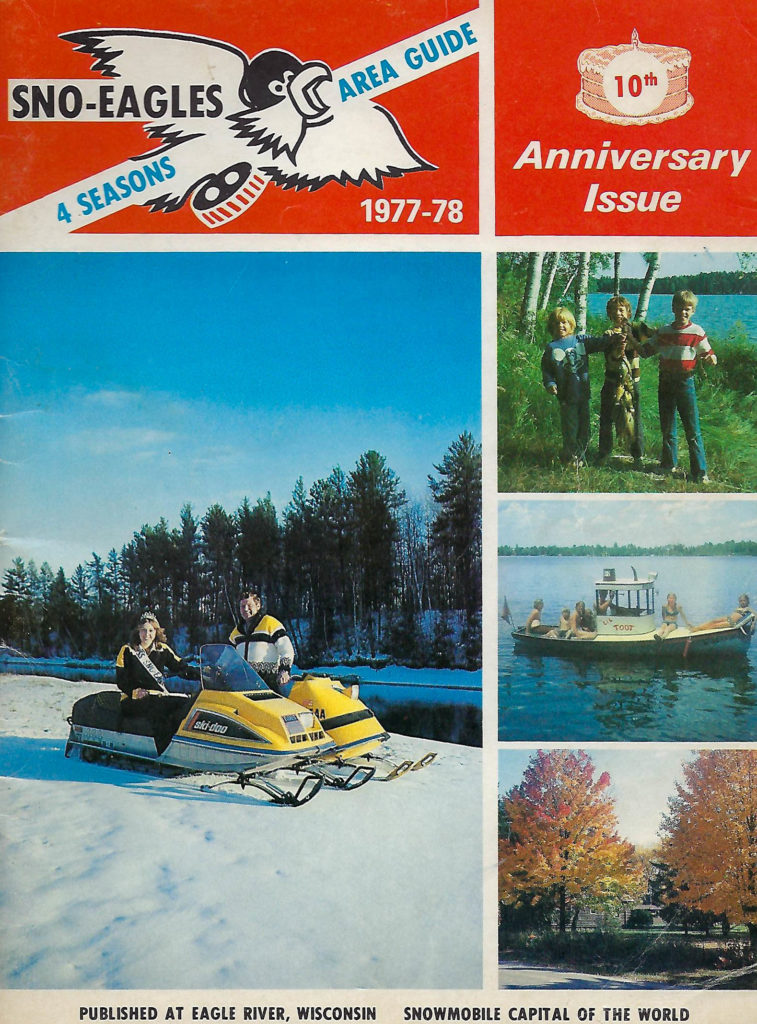 This is a letter from President Irv Henze. Here we have a photo of Sno-Eagles members building the restroom and shelter at the Buckatabon Creek.  It is still there today.  Pictured are Edie Kukanich, Josie Ayers, Sally Ayers, Jim Neis, Jim Ayers on the roof, Leon Kukanich and Jerry Ayers.

This page shows a photo of Miss “Racy Gracey” the Hare with a Pair,  (Mary Anderson) on Race Day in Eagle River.  There is also a photo of the new for 1974 Ski-Doo SV 200 Trail Groomer that the club used back then.  Some things never change, as the club is still grooming trails, but the cost of the groomer has increased from $20,000 to $220,000.

Here is a photo of the Sno-Eagles receiving a check for Trail Grooming.  The check is from proceeds for the Sno-Eagles banquet held at Hiawatha Supper Club in Eagle River.

Here we see a photo of Steve Thorsen, the 1977 World Champion Snowmobile Racer, receiving his trophy from Derby Queen Jody Jorgensen and Miss Wisconsin Julie Nowak looking on.  Steve races with the Polaris Race Team and is a 21 year old farmer from Fergus Falls, MN.  Steve averaged 85 mph on the track.  Estimated attendance was 15,000 over the Derby Weekend.