In February of 1969, Northwoods Sno-Mo club President Dan Healy proposed the club join AWSC for $10 per year. The club’s first Trail Boss, Roger Godleske, was appointed. The job of the Trail Boss was to organize the club rides to a dinner location in the area.

The club needed to look into money making “gimmicks” to support the new club. A barn dance was held at Jerry Wirth’s barn as a fundraiser and was being filmed by the Johnson Motors Co. The Johnson Motors Co. hired the club to shoot scenes for their upcoming promotional film.

In November of 1969 the club elected new officers for the year. Roger Godleske – President, Nick Vugrinec – VP, Sue Brackett – Secretary & Treasurer. Dues were set at $5.00 per year per family/individual.

In December of 1969 Jack Armstrong, the publisher of the club newsletter, suggested selling ads in the newsletter.  The newsletter would include a snowmobile trail map of the area trails. Jim Ayers, Junior Ludwig, Nick Vugrinec and Bud Rogers finished the fireplace in the club warming cabin at the track.

February 1970 came with the signing of Bill 410-S by Gov. Knowles that required all snowmobiles to be registered. The 3-year registration cost $6.00.  The funds helped area clubs develop more snowmobile trails. In September of 1970, Jack Armstrong told the club that ads sold in the newsletters would generate nearly $1000 per year for the club. The club elected new officers for the year Roger Godleske – President, Leon Kukanich – VP, Mary Scott – Sec/Treas.  A motion was made and passed to incorporate the Northwoods Sno-Mo Club.

No club records could be found from January 1971 to September 1971. However, during this time, the Northwoods Sno-Mo club became incorporated and changed the name to the Eagle River Sno-Eagles Snowmobile Club.

At the September 1971 meeting of the Sno-Eagles, the club elected the first Sno-Eagles officers. Jack Armstrong – President, Leon Kukanich – VP, Sue Brackett – Secretary, and Mary Kauzlaric – Treasurer. Also voted upon was a change to have 5 Directors. Dick Kauzlaric, Jim Ayers, Jim Hanson, Dan Healy and the outgoing President were elected Directors. The Sno-Eagles created a new set of bylaws and added Directors meetings. The purpose of the Directors’ meetings was to complete all the business of the club while leaving the club membership meetings to be short, provide club information and have some fun.

In November of 1971 the Sno-Eagles purchased a Bombardier Muskay from the Eagle River Lions club for $2300 to pull a drag and groom trails. Jim Ayers and his group of volunteers completed construction of the Buckatabon bridge.

In February of 1972 Edie Kukanich started a Ladies Trail Ride. Sno-Eagle Ladies drove to Three Lakes and met up with ladies from Three Lakes at the Alpine Inn for a day of riding and fun.

Trail maintenance was still being done by Jerry Wirth and Jim Ayers. The Conover Snow Buddies sent a letter thanking the Sno-Eagles for grooming part of their trail system. Walt Mayo, Vilas County Forester, asked the club to build a shelter at the Buckatabon Bridge as well as restrooms. The club agreed and also set up a fundraiser club dance for June 1972. 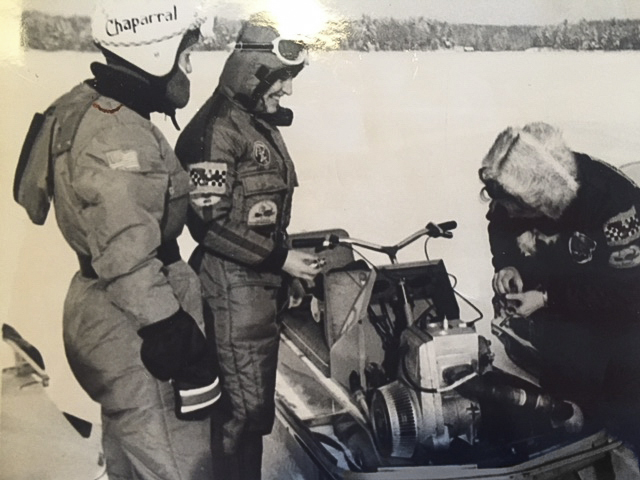