Posted on December 29, 2021 by Sno Eagles
The year 2021 started like 2020 ended – with the state and nation feeling the effects of the COVID pandemic. With this in mind, the monthly board of directors meetings were held at the Eagle River VFW, a larger venue, in order to maintain social distancing. The membership meetings were held at the World Championship Derby Complex (WCDC) for the same reason. Because in-person attendance was low due to the pandemic, it was decided to live stream each membership meeting on Facebook. This was well received by our members.
The snow season started out very slowly as there was not enough snow to open the trails until January 1, 2021. Even at this late date, the trails were in fair to poor condition.
The club made a commitment to have twin-track Pisten Bully groomers instead of tractors because of the lighter footprint in low areas. The New Holland T5 tractor is for sale.
The orange barrels were placed on Catfish and Eagle Lakes by January 21st.  Lake businesses will place, remove, and store them each year. Trails across lakes are not club trails but a convenience for lake businesses.
Due to the lack of snow this year, the Badger State Winter Games Torch Ride was completed by pickup trucks instead of snowmobiles.
All the Derby races were held and Miss Sno-Eagle, Cheyanne Warren, was the royalty for all races this year. In February, Carole Linn reported heavy website usage with 17,000 views of which 8,500 were trail condition views.
The February weekday away ride to White Pine, MI was attended by over a dozen hardy riders and they all had a great time.
The March annual membership meeting and elections were held via live stream.  All candidates were running unopposed this year. The new Vice President will be Keith Nettesheim; Fred Rockafellow will stay on as Treasurer; Ron Engels, Carole Linn, and Sandra Lathrop will continue as Directors.
The club sold the New Holland T5 tractor and reduced club debt by 36%.
President Rusty Wolf and VP Keith Nettesheim worked with Trail Boss Brian to alleviate some of the Trail Boss responsibilities and delegate them to other club members. The first major change was the creation of four quadrants for trail maintenance. The ninety-plus trail miles were divided into four quadrants – red, yellow, green, and blue. Each quadrant has a trail lead and alternate trail lead. The trail maintenance leads are provided a list of volunteers to brush and inspect the trails in April and in the fall. This system proved to be highly effective.
Trail maintenance utilizing a Pisten Bully equipped with the big brush cutter is conducted as needed.
Membership dues were increased from $35 to $50 for the upcoming 2021-2022 year. Membership dues are actually a fundraiser for clubs, and the dues have remained between $25 to $35 for many years.
A new fundraiser program was set in motion for the club as of July 1. This new program is called the Sno-Eagles Champions Campaign. The program allows a member to add a $50, $100, $150, or $300 donation to their membership payment. In recognition of the donation, the club provides a Sno-Eagles cap, Sno-Eagles performance hoodie, Sno-Eagles hooded sweatshirt, or Sno-Eagles helmet bag depending on the donation amount. The program was launched on July 1st to coordinate with the membership year. At the September board meeting, it was reported the club already raised over $4,500 through the Sno-Eagles Champion Campaign. This program is a huge success for the club.
The club sponsored a cash raffle this year and held the drawing on September 4th. The event was at Buckshot’s North with a tent, band, food, and bucket raffles. Charlie Check and his committee did an outstanding job putting the event together. It raised over $9,700. 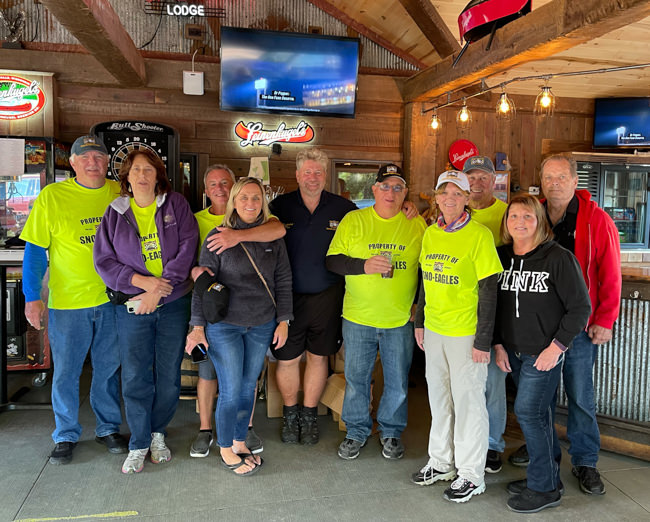 The Wisconsin Governor’s Snowmobile Council awarded the Sno-Eagles funding for an additional 3.8 miles of trails, bringing our total funded trails to over 68 miles.
In September, in-person general membership meetings were resumed at locations serving food and beverage.
The September meeting was held at Club DeNoyer, the October meeting at Erin’s Pub n’ Grub, and the November meeting at the Kathan Inn. 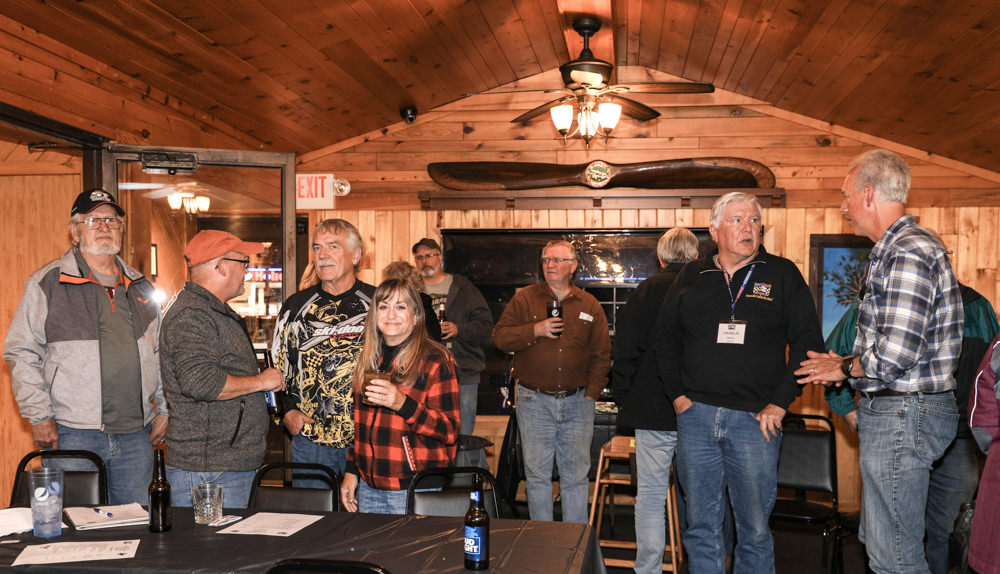 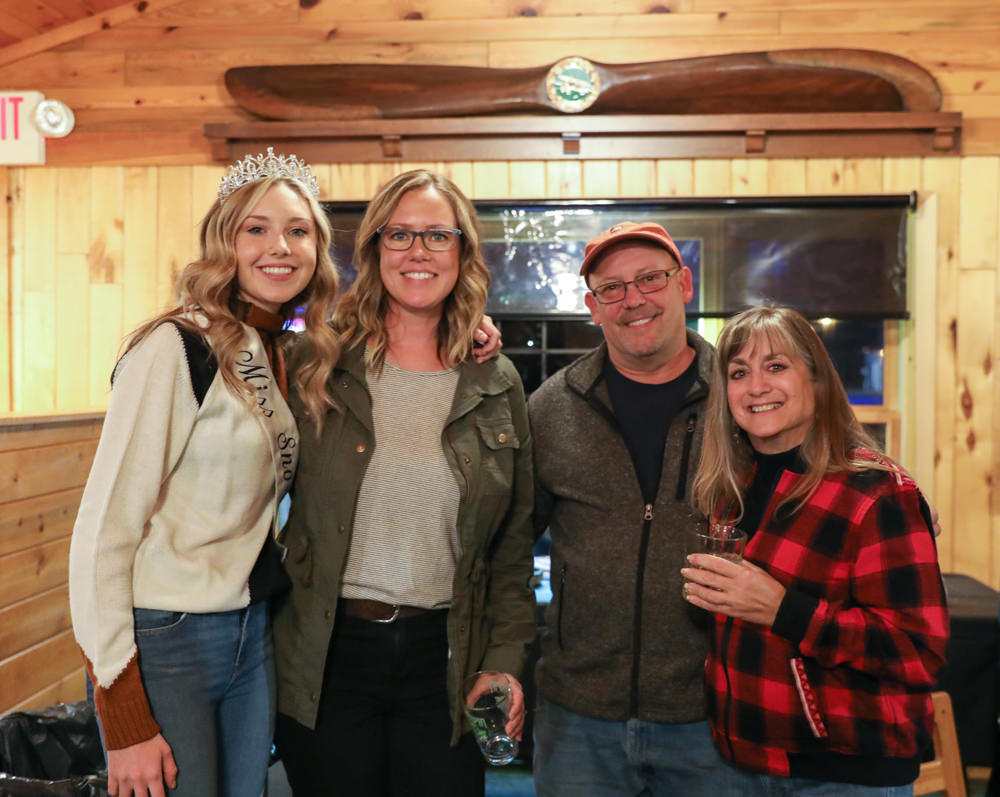 In October, the club sold the 2006 Pisten Bully to a club in Neillsville, WI for $89,000. Our club purchased the 2006 Pisten Bully only 18 months ago for $65,000, and after minor repairs and using it for a season, we made a profit.
October was a big month for many reasons, the biggest of which was the crowning of Olivia Hunter as Miss Sno-Eagle for 2021-2022. Olivia is a senior at Northland Pines High School and an avid snowmobiler.
After a lengthy hiatus due to Covid, Saturday Night Out, organized by Cheryl Storms, resumed at Eddie B’s White Spruce Inn on October 23rd.
During the AWSC Fall Conference in October, it was reported the largest snowmobile club in the state is St. Germain Bo-Boen’s with 1,100 members; the second-largest club is Mercer with 724 members, and the third-largest is the Sno-Eagles with 525 members. The Sno-Eagles are growing and going strong.
The Wisconsin Department of Tourism reported in October, that comparing September 2019 to September 2021 overall tourism spending was down 9% nationwide, down 21% in Illinois, down 20% in Minnesota, yet it was up in Wisconsin by 1%. Snowmobiling in the Northwoods is certainly a factor in the state tourism totals.
November found the club out brushing trails under the coordination of the trail leads with more than 30 members joining the effort.

With no general membership meeting in December, the club held a German-themed Christmas Party on December 16th at Chef Rene’s at The Eagle River Inn.

The Sno-Eagles will begin the 2021-2022 snowmobile season financially stable and with three Pisten Bully groomers, (2011, 2013, 2017) all in like-new condition.
The club can be proud of the transition from broken equipment and little money to three like-new groomers and money in the bank. This is the story of many snowmobile clubs throughout the nation. It is the story of dedicated men and women, who through their time, talent, and dedication, keep the sport of snowmobiling thriving.
Newsletters
Articles