During the December 2002 Sno-Eagles Christmas party at the Pine-Aire, Genny Mors was selected to be our Miss Sno-Eagle 2003. Congratulations to Gen.

In January 2003 the club provided volunteers to the Snowmobile Derby and was busy planning weekday guided rides for January and February.
Jo Casey, who was on the Miss Sno-Eagle committee, asked the Board to consider having a Miss Sno-Eagle and a 1st Runner up in the future, however no action was taken.
President Tahtinen asked each officer and director to consider what committee each member would chair. It was announced that the AWSC will be raising their dues from $6 to $10 this year.
The Antique Snowmobile Club of America came to Eagle River February 7-9 to conduct their winter meeting and rally. They held an antique snowmobile rally on Dollar Lake to commemorate the first Eagle River snowmobile race, held forty years ago.

January 2003 was another bad month for snowmobiling.

The January 31st Weekend Away was also a washout, however, some members drove their cars to Hayward for an Island Party, Weekend Away. 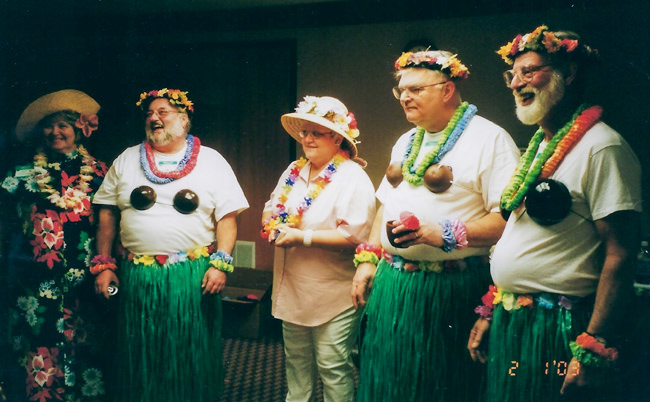 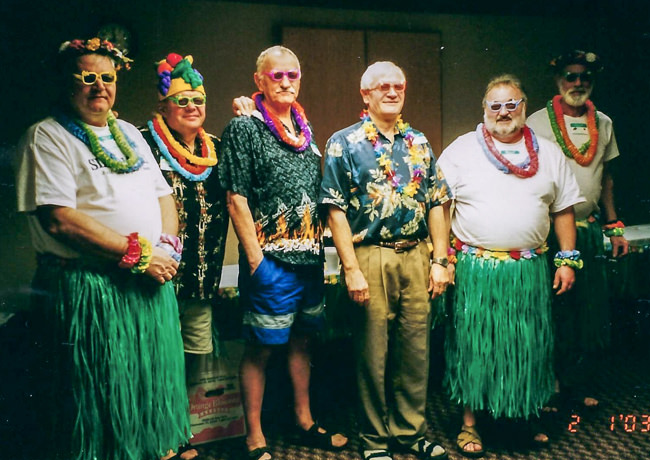 Mac McCoy announced in February that they will be hosting the annual Mother’s Day breakfast benefit at the White Spruce Inn in May.
At the June Board meeting, Audrey Stearns gave the treasurer’s report stating that the club only had $1829.84 in checking and a CD worth $6219. It is critical for the club to keep raising funds over the summer and fall to support the trails.
The Sno-Eagles float for the July 4th parade had Miss Sno-Eagle Genny Mors and Derby Queen Jessica Pollack riding on the snowmobiles. The club was proud of the beautiful ladies. 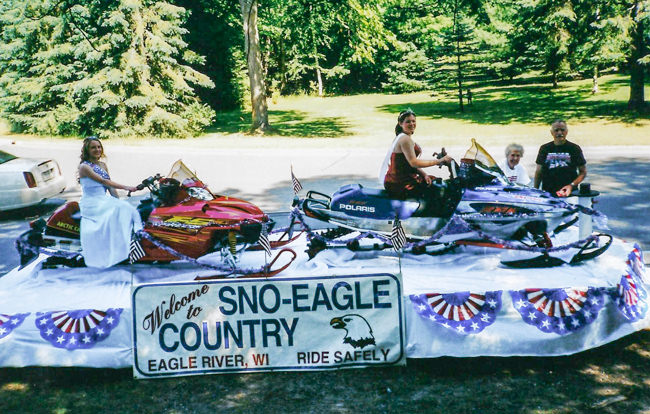 The minutes of the September Board meeting said that the club is having a hard time getting anyone to run for club office. With elections in October candidates are encouraged to step up now.
The annual Hayride took place this year with Jim & Sally Ayers as hosts. It was a great time.
It was announced at the October membership meeting that due to the lack of candidates for the election, Jerry Tahtinen will remain President, Rudy Spiess VP, Audrey Stearns Treasurer, and Paula Raska Secretary.
In November, President Tahtinen sent a letter to all members and placed the letter in the newspaper explaining the two clubs (Sno-Eagles and Headwaters) in the Eagle River area. President Tahtinen’s letter read:
“Headwaters vs Sno-Eagles. This sounds like two opponents in a hockey match, doesn’t it? The Sno-Eagles and Headwaters clubs are a team that provides quality snowmobile trails in the Eagle River area. Members and newcomers may not know what each club does so a definition may be necessary. The Sno-Eagles is a snowmobile club of about 140 members comprised of local and out of town members. The Sno-Eagles was formed in 1966 by a few local families. Every year this social organization puts together the area trail map and raises funds by selling advertisements on the map and trail signs. A second fund-raiser is the Dinner Books, which makes up the balance of the almost $20,000 that the club donates to Headwaters Trails each year. The Sno-Eagles plan guided snowmobile rides during the week and hold events like the Weekend Away, annual canoe trip, club picnic and others.
Formed in 1978, Headwaters Trails is an affiliation of Eagle River area organizations for the purpose of creating and maintaining a system of snowmobile trails. It is comprised of a Board of Directors representing the Sno-Eagles, the Chamber of Commerce, the City of Eagle River, and the Towns of Lincoln, Cloverland and Washington. With an operating budget of over $60,000 for fuel, insurance, wages, and equipment repair. Headwaters also has about $200,000 tied up in grooming equipment which is replaced at about a five-year interval. The group receives about $8,800 from the state for grooming.
It is obvious from these figures that Sno-Eagles and Headwaters need the support of local businesses to maintain the important role in the winter economy. Without snowmobile traffic many establishments would be hard-pressed to keep their doors open during the winter season.”
Newsletters
Articles