At the January 1997 Board meeting at the Copper Kettle, the President read a copy of the letter sent to the Vilas County Snowmobile Alliance stating that Headwaters Trails will not participate in VCSA. Headwaters felt there is too much in-fighting and they are not the same kind of club.

At the January membership meeting at Hunan Restaurant, President Ayers introduced the 1997-1998 Miss Sno-Eagle Jennifer Nellessen, who will be attending Madison Area Technical School after waiting two years to study dental hygiene. She is currently working at Black Bear Lodge as a housekeeper. The queen’s snowmobile suit was donated by Trackside of Eagle River. 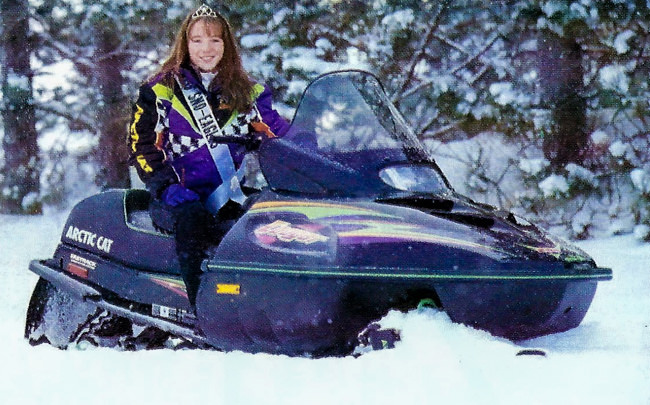 Jim Fabish is currently promoting a pledge ride and taking pledges for MS. The club will donate $250 as well to WI MS chapter. Miss Sno-Eagle spent a few weekends in January and February at Trackside selling club memberships.

John Stearns had his latest proposal to the city of Eagle River accepted to allow snowmobiles to use city streets to get to the marked trails.

The Weekend Away to MI was a fun filled time and thank you to John & Audrey Stearns.

In March, Headwaters Trails changed their Board of Directors makeup to consist of one representative each from the City of Eagle River, Towns Cloverland, Lincoln and Washington, one from the Rotary Club, two from the Lions Club, two from the Sno-Eagles and 5 from the Chamber of Commerce in an effort to get businesses involved in snowmobiling.

The bylaws were changed to eliminate the December membership meeting going forward.

April found Jim Ayers writing letters begging for the railroad right of ways up to Conover for snowmobiling. Jim is also working with the Croker’s and Zeloski’s to use their property for trails next year.

The Sno-Eagles have not received a financial report from Headwaters Trails for 1996 or 1997. This getting to be a challenge.

The annual July 4th parade, picnic, canoe trip and a poker run have been scheduled for this summer. Raceway Tavern will host the Poker Run for August.

Over the summer of 1997, the club struggled with relationship with Headwaters Trails. President Tahtinen is working hard to ease relations. The Sno-Eagles won First Place for their float in the July 4th parade.

The annual Christmas Party is planned for December 6, 1997 at the Pine Aire. Sally Ayers is planning the Safety Course. The October hayride left the groomer shed and headed to Hunter Lake boat landing where Nancy Tahtinen and Eileen Case had “stuff” waiting for members.

John & Audrey Stearns will host the Weekend Away in February heading to Porcupine Mountain Lodge.

At the Christmas Party in December, the club selected Mary Kotschi as Miss Sno-Eagle 1998.  She will receive $100 and a snowmobile suit from Heckel’s Eagle River Marina. Big news for 1998, as of Oct. 1997 another snowmobile club is being formed in Eagle River.  The name of the new club is the Sno-Twisters Club of Eagle River.  Organizers are Dan Gaszak Jr., Todd Bloom and John Mors.  They are trying to get a younger group of snowmobilers involved in our sport.

John Mors told the board that the new club was formed because the Sno-Eagles continues to turn down new ideas.  The Sno-Eagles Board wished them well.